Another thriller between the Diamonds and Silver Ferns, as New Zealand take a 53 to 52-goal win and go into match two of the 2019 Constellation Cup leading the series.

The Australian Diamonds will go into match two of the 2019 Constellation Cup trailing in the series after going down to the New Zealand Silver Ferns 53 to 52 in Christchurch on Sunday.

New Zealand were able to fight their way back from five goals down at the start of the fourth quarter to pull off the victory, the third straight time the result between the two teams has been decided by just one goal.

It was a shaky start for the Diamonds, struggling to get in a rhythm in attack against a dogged Silver Ferns line up led by superstar captain Laura Langman.

Scoring was not easy for Gretel Tippett and Caitlin Bassett up forward, having to work hard up the court to create scoring opportunities. Tippett, who only managed two of her eventual 24-goals in the opening quarter, looked rattled by the tight New Zealand marking, committing some crucial turnovers as the Silver Ferns set about building a lead over the visitors.

Up the other end, it was classic methodical and patient New Zealand netball, taking advantage of every scoring opportunity and piling on the scoreboard pressure. The attacking combination of Maria Folau and Ameliaranne Ekenasio, which proved so dangerous during the Netball World Cup, looked sharp from the get-go, scoring 13 from 14-shots to take a two-goal lead into the first break. 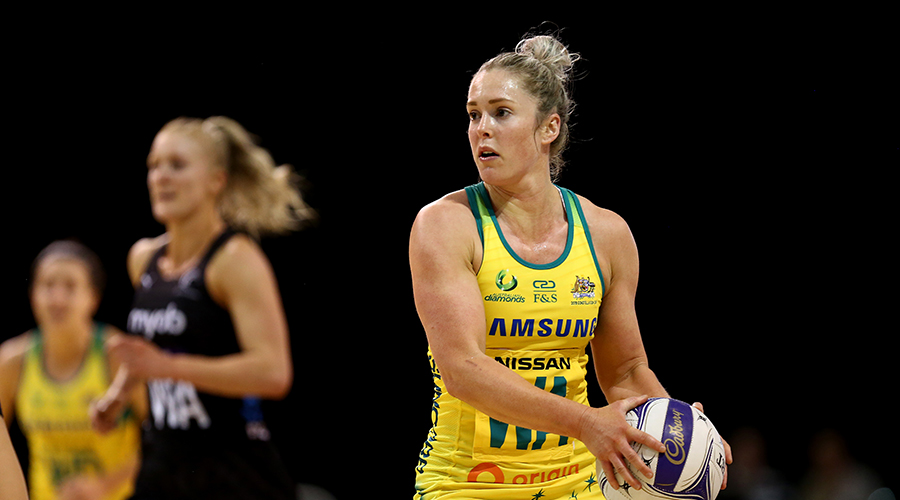 The sloppy play continued from the Aussies in the second quarter with the turnovers and penalties beginning to mount. And the home team didn’t let up against the struggling visitors, skipping out to a five-goal lead at the midway point of the term.

But, thanks to some desperate play from Ash Brazill and a pair of spectacular interceptions from Sarah Klau, the momentum began to swing.

The whole makeup of the Diamonds team changed when Sunshine Coast Lightning midcourter Laura Scherian stepped onto the court and made her Diamonds debut. Her power and speed at the wing attack position added the much-needed drive that the Diamonds desperately needed.

Seven of the last ten goals in the first half were scored by the surging Diamonds, who charged into the half time break trailing by just a solitary goal.

Things tightened up in the all important third quarter and, despite some amazing play from all players, neither could break away from the other as they traded goals for much of the opening half of the third.

It was the home side who blinked first, as the Aussies started to string some strong play together in attack and turn the screws in defence.

The Diamonds out-scored the New Zealanders 19-goals to 13 in the third and took a commanding five-goal lead into the final break.

It was going to take a monumental effort for the Silver Ferns to topple the Diamonds from five goals down, but the reigning World Champs were up to task, bursting on to the court and outscoring the Australian’s ten-goals to three to start the final term.

The home side took the lead at the mid-point of the quarter and never let go, holding off the visitors and winning the match by just one goal.

The two teams will now head to Auckland for match two of the 2019 Constellation Cup this Wednesday.