The Australian Diamonds will have to beat the New Zealand Silver Ferns in Perth if they hope to reclaim the Constellation Cup after going down to the Silver Ferns 53-goals to 54 in Sydney.

The Samsung Australian Diamonds will have to win match four of the 2019 Constellation Cup if they hope to retain the trophy, after falling to the New Zealand Silver Ferns by just one goal in Sydney on Sunday.

The see-sawing 53 to 54-goal win for the Silver Ferns sets up a massive, winner-takes-all game four in Perth next Sunday.

The Diamonds got off to the best possible start, jumping out to a six-goal lead in the early stages of the match. They were sharp and patient in attack, confidently moving through the Silver Ferns zone, and they were desperate in defence, creating gains and never giving the visitors any space.

But the resilient Ferns were up to the challenge, putting the clamps on the Aussie attack and cleaning up their transition game.

When New Zealand goal defence Karin Burger ripped down an errant Laura Scherian pass, setting up an easy Maria Folau goal, the Ferns were back to within just three as the siren brought to an end a thrilling opening 15-minutes of play.

With the New Zealanders gaining momentum, it was vital for the Diamonds to get off to a hot start in the second. And they did just that, scoring four of the first five to start the quarter.

Again, the Silver Ferns responded, as Folau and Ameliaranne Ekenasio combined for five straight goals to cut Australia’s lead back to just one with five minutes remaining.

The Diamonds seized the momentum back through some spectacular defensive play from Jo Weston and Ash Brazill, who both stood in front of a couple overly ambitious New Zealand passes as the Diamonds scored seven of the last eleven goals to go into half time with a four-goal lead.

New Zealand burst onto the court after the main break, scoring eight goals to one as they overtook the Diamonds and broke away to a three-goal lead.

It proved to be a stroke of genius, as the Melbourne Vixens goal shooting tandem out-worked the Ferns defence and Klau had the Qudos Bank Arena rocking as the Diamonds took a one goal lead into the final break. 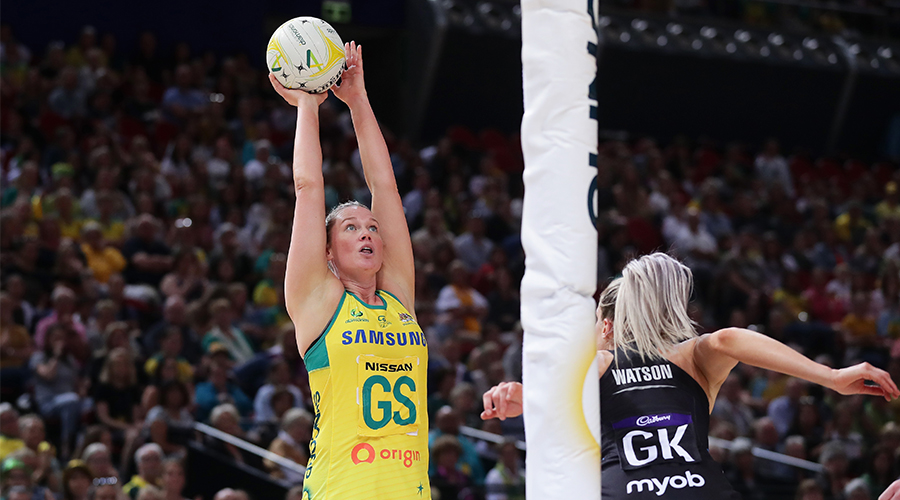 The lead didn’t last long, however, as New Zealand again got out to a three-goal lead with just over ten minutes remaining.

In an incredible run of play that saw just two goals scored in the space of four minutes, the game could have put away by either team.

But it was the Diamonds who blinked first, as a clutch long-range shot from Ekenasio broke the tie and a huge interception by Samsung Player of the Match Laura Langman sealed the one goal win for visitors.

Game four of the 2019 Constellation Cup will take place in Perth’s RAC Arena next Sunday October 27 with tickets available through Ticketek.