Given that Caitlin Bassett is only a few units away from completing a Bachelor of Communications majoring in broadcast and journalism, how would Bassett-the-headline-writer preview the Netball World Cup from an Australian viewpoint?

“I would say that we’re an ‘Unknown Quantity’, I guess,” says the Diamonds captain, the only player remaining from the triumphant 2011 team in Singapore and the most capped of the three left from the winning squad in Sydney four years ago.

“We’ve had some amazing performances from individuals, but what are we going to be like when we combine as a team? We’ve seen some great things already at our camp last week.’’

As to what particularly stands out in this group, which is one that Bassett stresses was picked on both form and talent, there is a short answer: athleticism.

“It’s funny, as new girls keep coming into the group it just makes me realise how unathletic I can be!’’ laughs the 193-centimetre shooter, who nominates Gretel Tippett, Jamie-Lee Price and Sarah Klau as examples of, well, what she is not.

“They’re so gifted athletically, and that really helps them get around, get off the body, take clean ball and come out of the circle and take some really good intercepts as well.’’ 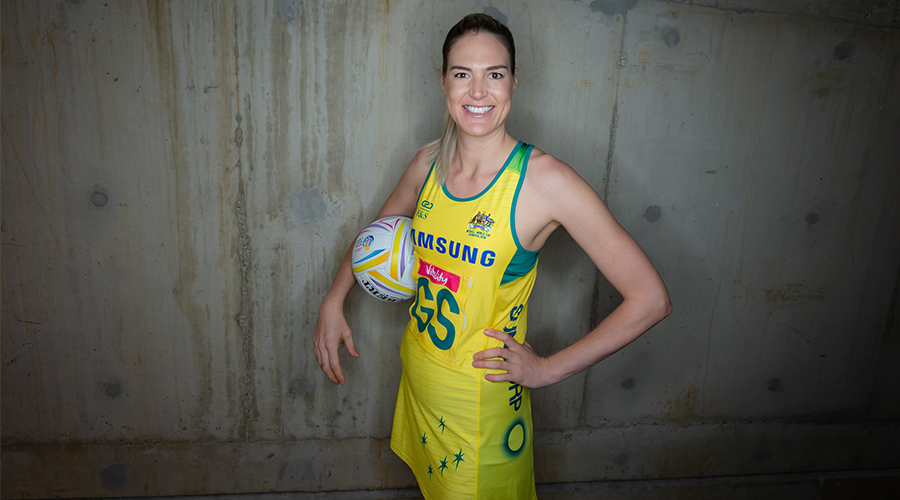 Hence, in part, Bassett’s confidence in the youthful squad that will tonight leave for a final training camp in Manchester, en route to Liverpool, where the Diamonds open their title defence against Northern Ireland on July 12.

But any relative paucity of internationals played when compared with the likes of England and New Zealand is irrelevant, according to the veteran of 90 Tests.

“They’ve got a lot of experienced players, purely because they don’t have a lot of talent coming and pushing them out of the way,’’ Bassett says, candidly.

“If you look at the likes of a Geva Mentor, she made her (England) debut when she was 16, which is not something that really happens in Australia because we have such hotly-contested spots.

“So when I look at the girls in our team and see what they’ve been doing in our competition, which is undoubtedly the best completion in the world, it gives me a lot of confidence knowing that we’ve played against internationals week in, week out, we’re at our peak physically, and mentally we’re used to really tough, physical matches.’’

Encouragingly, a final check on Bassett’s own health last week resulted in a resounding all-clear from the surgeon who in March inserted a plate in the left forearm she fractured during January’s Quad Series in England.

“It’s funny to think we were stressing about whether it was going to be ready for now, but it’s nice that I’ve got that under control and have nine rounds of netball under my belt,’’ she says. “It’s definitely 100 per cent. It looks like there’s still healing happening, but it doesn’t matter because the plate’s holding everything in place.’’

Just as Bassett herself is one of the strong foundations on which coach Lisa Alexander’s team is built, the 31-year-old having announced herself as a raw, slightly uncoordinated rookie eight years ago in Singapore with 151 goals from her 155 attempts, including the match-winner in double-overtime against the Silver Ferns.

“I was reminiscing with Laura Geitz the other day,'' she says. "We were ‘roomies’ in 2011 and got to come on in that final match, and then in 2015 she was captain and we were walking out together as starting seven players.

“So much had happened in those four years, and if you look at the last four years there’s been huge changes in personnel in the team and we’ve got all these fresh, young exciting faces hitting their first World Cup, which I think is great.’’

Bassett is at the helm now, and a player who admits she never really saw herself in a leadership position has gained confidence from being her teammates’ choice.

Authenticity is a key, she believes, while Alexander has watched her spearhead grow into the role and work hard to maintain team standards, while developing the ability to keep the group focused and calm.

“Calm is definitely a word l like because… the feeder’s not going to want to give me the ball if I have this panicked look,’’ Bassett says.

“It’s hard sometimes to stay calm and controlled, especially when you’re getting a beating from the goal keeper, so for me I really like to just stay unflappable and not let anything worry me, and when a big hit comes I just smile and shake it off and just try and get on with my job.’’

Captaining Australia at a World Cup is her biggest one yet, and Bassett admits she is hard-pressed to think of a greater honour in the sport.

Bringing home the title may well qualify, which would make for a very well-known quantity of another kind since the inaugural tournament in 1963: Australian wins, 12.