The Samsung Diamonds and England Roses added another chapter to their growing rivalry as Australia strengthened its Netball Quad Series claims with a 52-47 win at the Newcastle Entertainment Centre.

It was the much-anticipated rematch between the Gold Coast 2018 Commonwealth Games finalists, but this time it was the Diamonds who kept their heads when the game was on the line in a tense last quarter.

England clawed back from a big deficit at three-quarter time to trail by just two goals with six minutes remaining. But a series of cool defensive plays from the Australians, and a held-ball decision against Helen Housby, enabled the hosts to hang on.

A mighty performance from England’s Serena Guthrie was not enough to pull off a stunning comeback.

Her match-up with Diamonds opponent Liz Watson was one of the highlights, after Watson entered the contest at quarter time.

Watson was named player of the match after a near flawless performance in the mid-court.

Coach Lisa Alexander made just one change to the Diamonds starting seven that comfortably accounted for South Africa in the opening game of the series.

Kelsey Browne started at wing attack, but the strongest feature for the Australians in the opening term was the defensive work rate of Kim Ravaillion and Gabi Simpson.

They kept the England feeders off the circle edge, with Guthrie needing all her court smarts to find a way through the Diamonds defence.

The unavailability of Jo Harten due to a knee problem gave attacking spark Natalie Haythornthwaite a chance to start alongside Housby in the Roses shooting circle.

A high tally of turnovers at the Diamonds attacking end meant the Commonwealth champions had more scoring opportunities and they went to the first break with a three-goal lead. 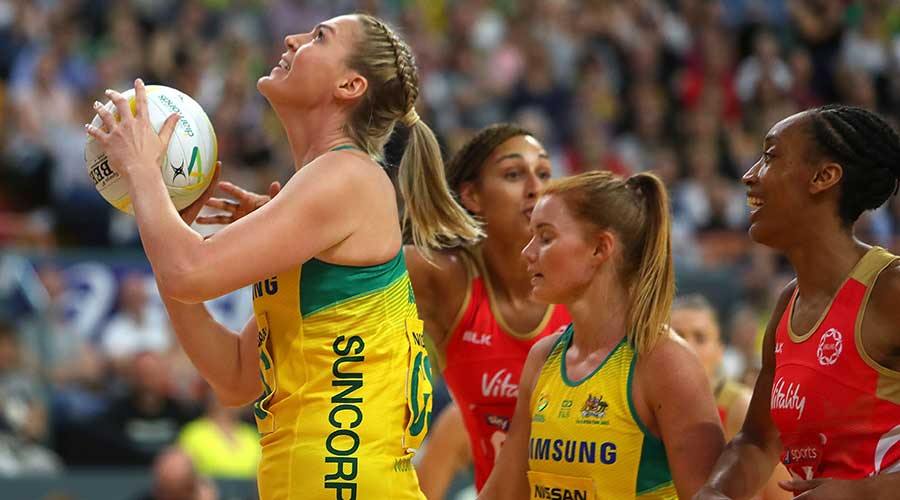 The genius of Guthrie and Geva Mentor, which kept the English in charge through the first quarter, had less influence as the game wore on.

The result was a 15-10 quarter in the Diamonds’ favour.

Australia took a one-goal lead into the second half and the little wins kept mounting for the hosts.

Goal attack Stephanie Wood, who carried a thigh niggle into the game, was rested after half-time leaving Gretel Tippett to take over the link role.

The tweaked attack, powered by Watson and Browne, led Australia to a 41-34 advantage at the final change.
Guthrie sparked a fightback from the Roses in the final term.

Her energy, speed, vision and grit set a stunning example for her teammates and caused some nervous moments for the Australians.

What had been a commanding lead was suddenly a nail-biter but the Diamonds regained their nerve over the closing minutes.