The Diamonds have set up a huge Quad Series final showdown with the England Roses after holding on to defeat a gallant New Zealand Silver Ferns, 50 goals to 53 at London's Copper Box Arena.

It was a brave performance by both teams and one that head coach Lisa Alexander thinks the Diamonds players and fans should be proud of.

"They showed the true Aussie spirit out there, lots of guts and determination, they love representing their country, we hope everyone is proud back home because that’s what we aim to do." She said.

Australia burst out of the gates, scoring 14 goals to six in the opening quarter and punishing the Silver Ferns who were slow to react to the relentless pace the Diamonds set.

Caitlin Thwaites and Stephanie Wood formed a formidable attack for the Diamonds as Wood's speed and movement created plenty of space for the deadly accurate Thwaites to operate.

"Our start was definitely a focus for us." Thwaites said after the match. "The first quarter against South Africa was our weakest and we really wanted to correct that and come out full throttle today and I think we nailed that."

The Silver Ferns came out firing in the second quarter, clawing their way back into the contest thanks to some stifling team defence, pinpoint passing from captain Laura Langman and spectacular shooting from Maria Folau, who finished the game with 30 goals from 37 shots.

Despite this, thanks to some brilliant defending by Jo Weston and Courtney Bruce, Australia weathered the storm and took an eight-goal lead into the halftime break.

The second half was played at break-neck speed and the Silver Ferns never let up their intensity, cutting the Aussie lead to six going into the last quarter.

Gretel Tippett came on for Wood five minutes in to the third and had an immediate impact on the game, scoring 12 goals for the match at an incredible 100% shooting percentage.

The final quarter was breathtaking and a true showcase of how these two teams hope to play going in to this July's Netball World Cup in Liverpool.

Thanks to some stout defending by Casey Kopua and fearless shooting from Folau and Ameliaranne Ekenasio, the Diamond's lead was cut to just two goals at the midway point of the final quarter. 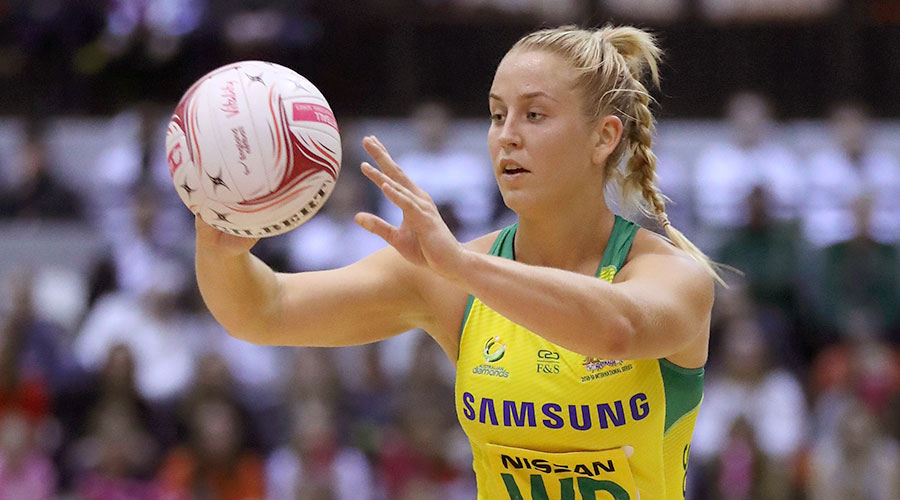 But the Diamonds players stepped up and proved why they are the number one team in the world.

Liz Watson, Kelsey Browne and player of the match Jamie-Lee Price's ability to control the pace of the game through the middle was instrumental in holding off the spirited Silver Ferns, who fought hard until the final whistle.

Price continued her hot form for the Diamonds and looks to be really enjoying the pressure of wing defence where she started replacing the injured Gabi Simpson.

"It was composure and patience. The Ferns really brought it to us today and I’m really proud of the girls because we stuck to the way that we play, and we didn’t let the pressure get the better of us."

The stage is set for a massive Quad Series decider as the Diamonds play against England tomorrow morning at 5am AEDST in London.