The Australian Diamonds' depth was on show when they cruised home to a convincing win, setting the tone for their campaign.

It was lucky number seven for the Australian Diamonds’ opening match against Barbados with seven Commonwealth Games debutants contributing to a 77-goal win.

The team’s confidence never waned as they hit the court rearing to go, holding Barbados to one goal for the first seven minutes of the match.

Captain Liz Watson and vice captain Steph Wood looked calm and collected in their second Commonwealth Games appearances. Their skillful connections in attack were elevated by the vocal input of Kate Moloney who charged at center.

At the other end of the court, Courtney Bruce was up and about achieving intimidating touches to the ball.

With no changes to the starting seven in the first half, the Diamonds entered the back end of the match to lead by 43 goals, 52-9.

The second half of the match gave leeway for head coach Stacey Marinkovich to scout potential combinations for future match ups.

Cara Koenen and Keira Austin came into goals while Ash Brazill took to center to allow Sunday Aryang and Sarah Klau to rotate on in defence.

With her wife, children, parents and former coach in the Birmingham stands, Brazill expressed the importance of competing in her first Commonwealth Games.

“It’s pretty special to live my dream and be here with the phenomenal bunch of girls, and my family in the crowd,” she said.

Australia finished on 95 goals to Barbados’ 18 with Watson topping the board with 29 goal assists and Bueta shooting a powerful 44 goals.

The win provides confidence as the team look towards their second match against Scotland.

The Scottish team will have the benefit of fresh legs, given they will launch their Commonwealth Games campaign against the Diamonds today.

But the Diamonds' performance on day one of the competition proved the team has the luxury of versatile players who can rotate off the bench.

The first centre pass of the Diamonds match against Scotland will be taken at 9pm AEST and can be watched on 7Plus. 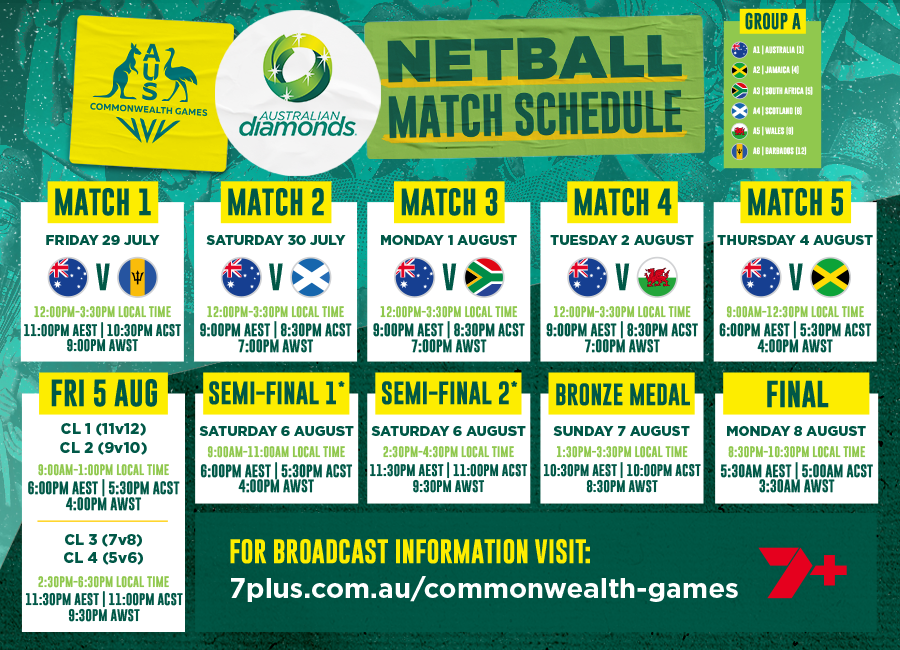