To celebrate one of the most thrilling games in Diamonds history, we chat with former Diamond Caitlin Thwaites who played a huge roll in the 2019 Netball World Cup Semi-final against South Africa.

No matter who you were supporting, it’s hard to argue that the 2019 Netball World Cup in Liverpool wasn’t right up there with the best display of international netball there has ever been.

Coming into the tournament, fans could make a strong case for at least five teams being favourites to lift the cup.

On paper, the Jamaicans looked like they could cause some upsets. No one wanted to face the South Africans and their impenetrable defence. Despite some spotty form coming into the tournament, you couldn’t count out New Zealand. The reigning Commonwealth Games gold medallists England would have the entire country right behind them. And the world number one Diamonds would be going for their third straight World Cup win.

Coming into the semi-final round of the tournament, four of those five teams were right there vying for a chance to play in the final.

First up would be the Diamonds taking on the red-hot South Africans before the tournament favourite Roses faced-off against the Silver Ferns later that day.

The pointy end of a tournament like the Netball World Cup is as exciting as it is nervous for everyone involved. We reached out to former Diamonds shooter Caitlin Thwaites to talk us through everything surrounding the penultimate match.

“I think the mood was definitely one of anticipation, excitement, and some nerves. Being part of the Diamonds, we go into these major tournaments aiming for gold. That is the dream, but also the expectation we have of ourselves, and we know others have that expectation of us too.

“So, getting through all the rounds and putting ourselves in that position, there is a feeling that we have come so far to get there, but it is still all ahead of us.” 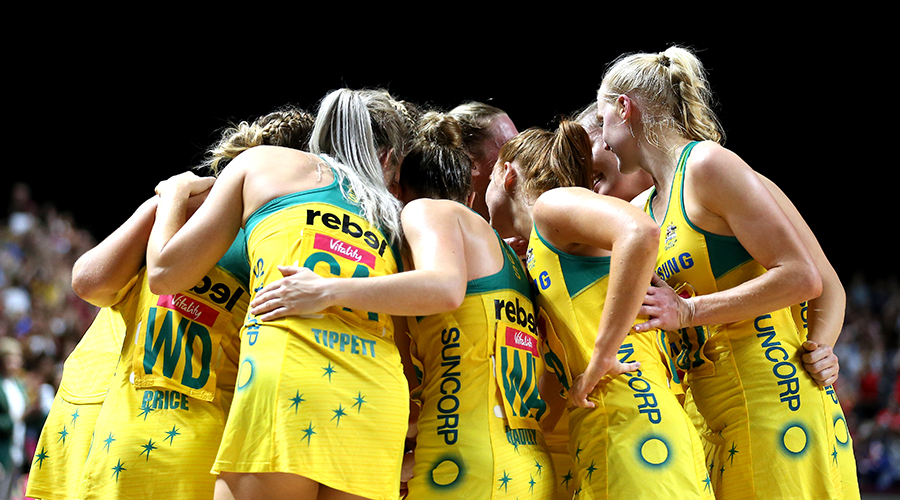 The Diamonds would come into the match as favourites but every player on the squad knew that it was going to be an incredibly tough 60-minutes of netball.

In what would end up being a stroke of tactical genius, Thwaites was named the starting Goal Shooter and would share shooting duties with Gretel Bueta (nee Tippett) .

“The Diamonds having strong combinations with every player, embracing the differences each combination has, and using those strengths to our advantage has been an evolution that has set us apart.

“Tactically, for our opposition South Africa, that was our starting seven. Having that clear understanding meant that I knew the role I needed to play.”

“Not only within my combination, but because me starting meant our Captain was on the bench. I needed to step up and take on some of that on court leadership too!”

It was all going according to plan for the Diamonds in the first half, particularly for Thwaites, who shot a perfect 14 goals from 14 shots in the first two quarters. She would end the game with 30 goals at 100% accuracy.

But South Africa hit the Diamonds hard in third quarter and the capacity crowd was right behind them, sensing an upset.

“The Proteas are a quality side, and they have been getting closer and closer to us in the recent encounters, we knew they weren't just going to roll over.

“We had done a lot of training on how to wrestle back momentum when the opposition takes it. To identify it happening, to feel that pressure, be able to weather the storm and employ those strategies to fight our way out the other side, it was great.

“Maybe a little too close for my liking... but it was great.”

What resulted was one of the most thrilling finishes of the tournament, a moment we won’t spoil for those who haven’t watched the game.

The Diamonds returned to the team hotel relieved and excited, knowing exactly what they had just achieved and fully aware that the job was not done.

Something many might not know about the 2019 Netball World Cup is that the Diamonds and the Roses stayed in the same hotel throughout the tournament. In fact, the team rooms were right next door to each other.

“Throughout the tournament we would run into them, maybe have a bit of small talk with the ones you are friends with, but mostly we kept things to a smile and nod in the hallway, not wanting to give anything away to the opposition.”

Much of the team gathered in front of the TV to watch those Roses play the Silver Ferns, some sure who they wanted to face in the final, some too nervous to watch, most ready to take on either.

“There was a lot of discussion about who we wanted to end up playing in the final. We desperately wanted to get some revenge from the Commonwealth Games final the year before, so maybe if England won that would be best, but then it was on their home turf, with a home crowd… that could help them...

“Or did we want it to be another one of those epic contests between our biggest rivals New Zealand, who we managed to beat by one just a couple of days earlier?

“I think most of us came to the conclusion that it didn't matter, we were ready to take on either.

“The sense of occasion had everyone excited, I was trying to stay calm to conserve my energy... I had baby Hazel (Assistant Coach Claire Ferguson’s newborn daughter) sitting on my knee, having cuddles and Claire wanted to take her back off me so I could focus, but Hazel was actually keeping me calm!

“It was an intense game to watch, and once we knew the outcome we switched straight back into doing all we could to recover, mentally and physically prepare for our next opponent and the big Final.”

Netball Australia CEO to depart at the end of 2020