Samsung Australian Diamonds captain Caitlin Bassett will miss the Northern Quad Series, due to kick-off on Sunday in Liverpool, after sustaining a minor fracture to her left forearm during a practice match in Manchester on Thursday.

Bassett will spend six weeks in a splint and is expected to be recovered in time to play the Suncorp Super Netball season opener for her new team GIANTS Netball.

While Bassett will take no further ‘on-court’ part in the Quad Series, she will remain in England with the team for the remainder of the tour and maintain her position of captain of the touring team.

GIANTS Netball goaler Kiera Austin has been elevated into the Samsung Diamonds squad and will travel to England to join the team on Sunday as an injury replacement player.

Samsung Diamonds Head Coach Lisa Alexander is disappointed to see Caitlin miss the rest of this test series but is confident in the depth of the current team.

“We are upset for Caitlin and to have her miss this series isn’t ideal, but we’re prepared for situations such as this and I’m confident the team we have playing on Sunday, and for the rest of the series, has what it takes to remain on track throughout this tournament,” she said.

“Our medical team will work closely with Caitlin to manage and rehabilitate her injury alongside her Suncorp Super Netball club medical team. We wish to see her make a thorough recovery.” 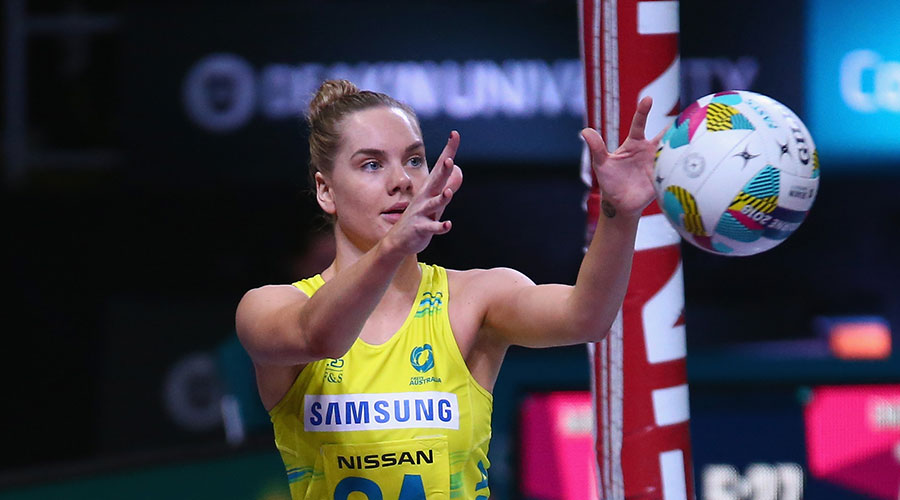 Alexander said that, while it’s not on ideal circumstances, the selection panel is pleased to elevate Kiera Austin into the Diamonds squad and for her to be joining the team in England as a replacement player on such short notice.

“Kiera was an invitee to our Diamonds squad camp in September and we were very impressed with her performance at this camp, so we’re delighted to have her joining the team for the remainder of this tour,” she said.

The Samsung Diamonds will take on the South Africa SPAR Proteas in Liverpool on Monday 14 January at 2:15am AEDST before travelling to London for matches against New Zealand and England next weekend.