Look for a rainbow in every day.

These are the words that new Diamonds squad member Amy Parmenter carries wherever she goes.

They also built the foundation for a charity project that would become central to Parmenter's efforts to aid cancer research funding.

In 2017, Parmenter and her sister Daisy picked up a passion they'd put to the side for a few years.

“I was with my sister one summer and we started tie-dyeing after not having done it for a while,” Parmenter said. “We used to do it with my mum when we were younger.” 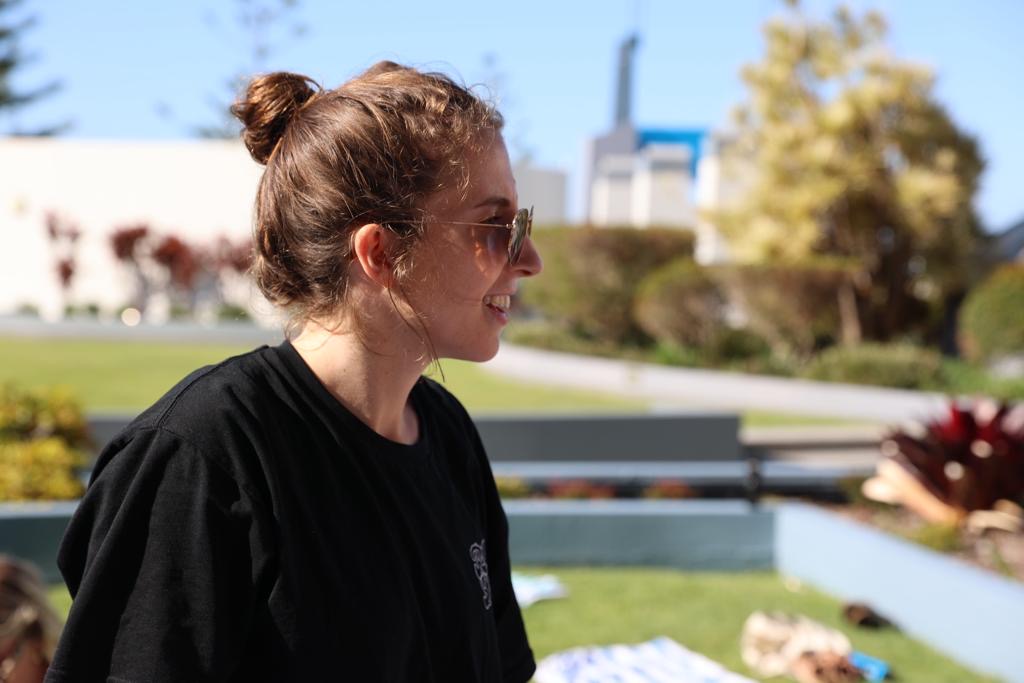 At the age of 15, Parmenter lost her mother Gilly to a rare form of Mesothelioma cancer.

“I remember being at the Byron Markets years and years ago and mum being outraged and/or impressed with the price they were selling DIY tie dye t-shirts,

“As she did with lots of things, she took it into her own hands and ordered bucket loads of dye and started doing a stall at the Glenmore Road Public School Fete.

“When we picked it up again and people showed interest in the pieces, we thought it could be the perfect fundraiser.”

And with this sentiment, The Tie Dye Project was born.

“We went to every Kmart, Target and Big W we could and bought out every white cotton tee they had,” Parmenter laughed. “From that point it just kept getting a bit bigger.”

In the first couple of years, the girls started small and raised $5,000 by dyeing t-shirts and a mixture of accessories like tote bags and scrunchies.

At the end of 2018, the Parmenter sisters met 12-year-old cancer patient Molly Croft. It was this introduction to the tween cancer fighter that Parmenter said gave the project an additional voice for change.

“She was the toughest kid with the biggest smile on her face, and not to mention she was a huge netty head,” Parmenter said.

“She wanted to get involved with our project, so we made about 1000 t-shirts that year and sold them all with profits going to the Oncology Ward at the Sydney Children's Hospital.”

A post shared by The Tie Dye Project (@thetiedyeproject_)

Nowadays, the production of tie dye products for the project has more elbow grease behind it.

With the community behind the project expanding each year, an annual get-together sees 50-60 people across tie dye stations working towards the worthwhile cause.

“You could say it turns into a bit of a production line,” Parmenter said. “Everyone has their role, like my dad who cooks up the BBQ, and my grandma who comes to peel stickers and put them on the brown packaging bags, like a pro of course.”

During the Origin Australian Diamonds recent training camp in Queensland, the squad gave Parmenter's grandma a run for her money, jumping on the tie dye train to bond as a team while supporting the fundraising initiative.

“It was funny going in as a debut to camp. We'd just lost to the Swifts in the Suncorp Super Netball Grand Final and I was rooming with Maddy Turner who got MVP in that match - straight away being with her I was like ‘She is a legend’.

“You totally forget about the SSN season and how you are enemies because, just like that, you're teammates and it's a cool environment where everyone is open and focused on growing those connections.” 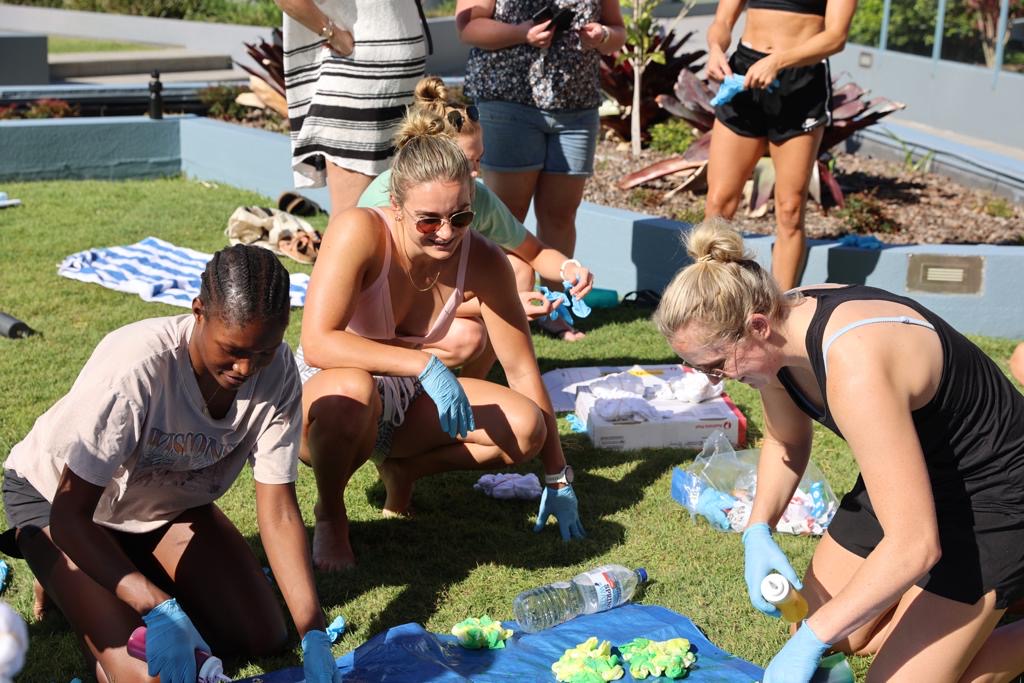 Parmenter said these connections were abundantly clear as the team sat in a circle on the grass joking about with some dye in one hand and tees in the other.

“I was telling the girls about The Tie Dye Project, and someone posed the idea of doing it together in Queensland and it just sort of happened,” she said.

“I think the whole afternoon we spent doing the tie dye reflected the culture the Diamonds have, and we really felt like sisters deeper than on the court.

“A lot of the girls had their Australian tees that are cotton, so we tie dyed those green and gold and got them fully signed by the squad.

“Everyone also individually tie-dyed their own plain white tees to take home after camp and keep the tie dye positive vibes.” 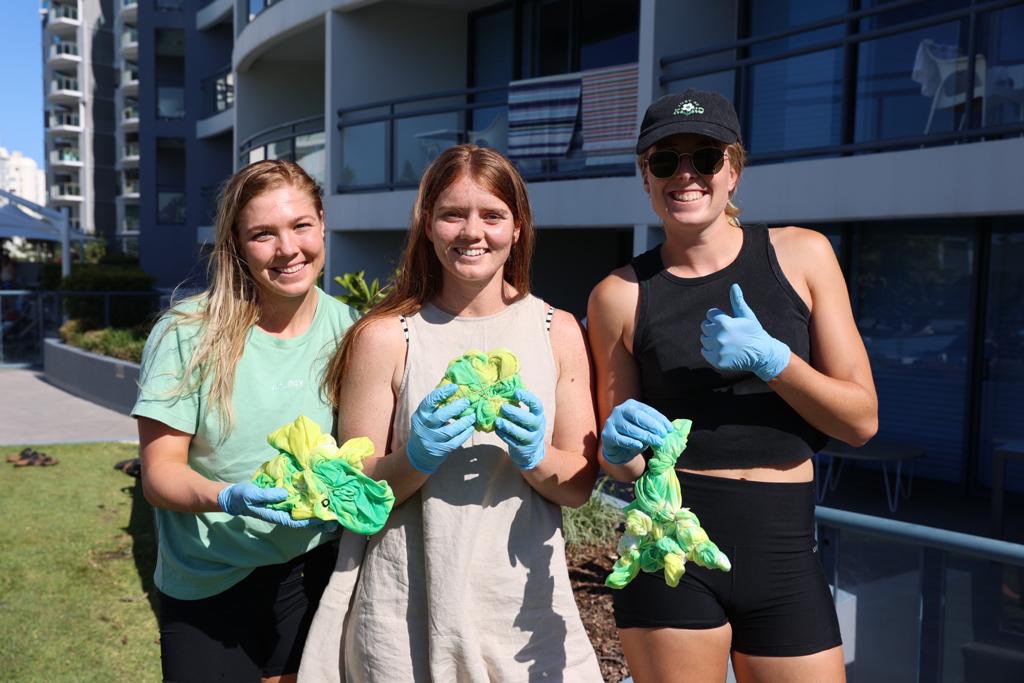 As for the creatives in the squad, Parmenter said she may have found a helping hand or two for the project's next production day.

“Sarah Klau, Ash Brazill and Kate Moloney went very chic with the pink only look, Sunday Aryang's turned into a Halloween costume with the orange,” she said.

“But let's just say Sophie Dwyer and Paige Hadley showed everyone who the perfectionists in our team are.”

A limited number of the yellow and green Australian Diamond signed tie dye tees can be purchased at www.thetiedyeproject.com with all proceeds going to the Sydney Children's Hospital. The limited edition shirts are $100 each and will be available Sunday October 10 from 1:30pm (2:30pm AEST).

Parmenter said fans who wished to support The Tie Dye Project will be able to do so in the coming months.

“I am thinking of doing netball bibs for teams to train with, so hoping these will be available late November to early December.”