The Samsung Australian Diamonds’ trans-Tasman winning streak has been snapped by a Maria Folau-inspired New Zealand in a 55-44 victory to the Silver Ferns at Claudelands Arena, Hamilton.

Jamie-Lee Price’s Test debut on her former home court was one highlight for the Diamonds, who now must regroup ahead of the Constellation Cup series climax in Wellington on Thursday.

Folau was outstanding, finishing with 40 goals from 41 attempts to get the better of the Diamonds defenders and stop Australia’s winning sequence.

The Diamonds tried 11 of their 12 players but struggled to find a combination to stall the home side’s momentum.

Gretel Tippett (16/17) was among Australia’s best players but she didn’t quite produce the goods for a full four quarters.

The battle between centres Liz Watson and Laura Langman was a thriller. Both were hugely influential, with Langman adding 20 goal assists and Watson 19. 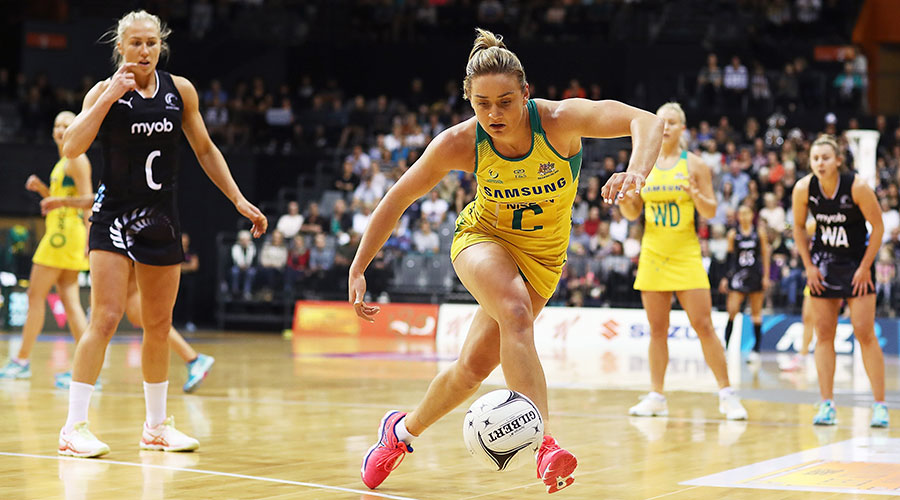 Silver Ferns goal keeper Jane Watson continued her fine series form by being named the player of the match. Watson’s seven gains indicated the quality of a performance that forced regular rotations in Australia’s attack end.

Another player, New Zealand’s Erikana Pedersen, made her debut when wing attack Gina Crampton left the court early in the first quarter for medical attention.

It was during that brief period that Tippett led Australia on a scoring run that threatened to blow away the Ferns.

Her nimble footwork and use of the body was too much for former New Zealand skipper Katrina Grant, with Tippett finishing the quarter with eight goals at 100 per cent accuracy.

This New Zealand outfit doesn’t quit, and Folau scored 13-from-13 to put the hosts in front by one goal at the first change.

Folau was almost unstoppable. Revelling in her new role at goal shooter, the veteran’s confidence from mid and long range was the difference between the sides at halftime when the home side stretched its advantage to 30-26.

For the first time in this series Australia was behind and searching for answers. Folau’s energy was infectious, caught by centre Langman whose pressure through the midcourt worried the Australians.

The changes couldn’t wrestle back control from the hosts though, whose lead extended to seven during the third quarter.

Caitlin Bassett was the Diamonds’ best avenue to goal after entering the contest at the start of the second quarter. But she returned to the bench making way for a new look shooting pair of Tippett and Wood in the last term.

Australia’s hopes of a stirring comeback all but ended when the Silver Ferns wing defence Sam Sinclair forced a series of turnovers midway through the fourth quarter.