Maddy Turner was supposed to be leaving for her end-of-season Hawaiian holiday on October 22. Her travel itinerary has changed. In a good way.

The Diamonds’ newest defender will instead report for international duty in Christchurch, Auckland, Sydney and Perth, replacing the pregnant April Brandley, and rewarded for a fine, championship-winning Suncorp Super Netball season with the NSW Swifts.

Yet if Turner's decision to book an overseas trip at Constellation Cup time suggests an utter lack of confidence in her selection prospects, then consider that the 23-year-old was yet to earn national squad selection when she was promoted directly into the team.

The result is a six-day delay in her outbound flight to Hawaii; bikini shopping on hold as she prepares to slip on a coveted gold dress. Which is not so much a small sacrifice as, well, no sacrifice at all.

“It’s like the pinnacle to make that team, and now it’s just about showing that I deserve to be there and owning it,’’ says the self-confessed defensive “pest” who describes her playing style as “skin to skin” and counts “not an inch” among her mantras.

Yet what Turner insists she had not anticipated was last week's phone call from Diamonds' head coach Lisa Alexander. The qualified speech pathologist was a passenger in a car being driven by fellow Swift Sophie Garbin when she was almost lost for words.

"It was meant to be confidential but I think Soph heard every word because my phone was up so loud. But it was quite funny. When they said ‘you’re in the team’, I turned to the side and Soph’s bawling her eyes out.’’

They are a tight bunch, these Swifts. Turner insists she was more excited when she heard that her long-time defensive partner Sarah Klau plus Paige Hadley had been selected for the 2019 World Cup team than she was upon learning, three months later, that she'd been picked to join them.

As she watched that Liverpool final against New Zealand in her lounge-room back in July, never did it occur to Turner that the next time a Diamonds’ team was picked she would be in it. Nor had she grown up in Adelaide imagining she would one day represent her country.

“Oh God, I was always a bit of a netty nerd, so I loved watching the netball but it was obviously a very far away dream that I didn’t know was possible or impossible,’’ she says. 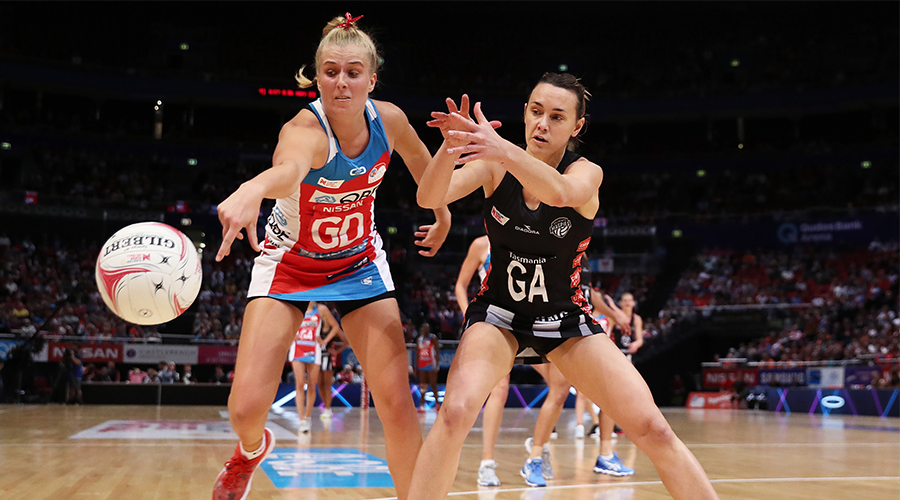 “I hadn’t even considered playing netball as a profession when I was growing up. I had no idea about anything like that. So I kind of just stumbled into it, I guess.’’

Back in the day, young Maddy was both a talented golfer and a goaler/Nat Medhurst fan, but defence proved to be her calling, with Klau her partner and friend since their state 17-and-under days.

Indeed, their combination is so familiar that both agree it is almost “telepathic’’ - even if they also note that Swifts coach Briony Akle would like a bit more voice at times.

"We just know each other’s game so well, and it just works,'' says Klau. “To play alongside Maddy in the green and gold (will be) incredible and I’m just so, so happy for her. She’s been working so hard.

"She deserves to be there. Her last few games she’s been playing out of her skin, and she’s only going to continue to grow. She’s an amazing player and teammate, and I think she’s going to blossom.’’

Amid season-long surveillance, Alexander, too, noted Turner’s outstanding form in the last two finals, in particular, while her established pairing with Klau is another big tick. Resilience is a clear strength for a player who has contested all 62 Swifts' games since the gamble to move states that she recalls as “a leap of faith’’ for 2016.

Electing to leave the South Australian netball "bubble" and challenge herself in a new environment where she new no-one was a risk that has now delivered handsome rewards. “In the first year I learnt so much, and then the following year I got a couple more South Australians over and the place felt like home.’’

It still does, and one challenge was to hold her tongue among the Swifts’ “Mad Tuesday” celebrations following Alexander's surprise call.

As for her family: “I called my mum, dad and sister and told them, and they were probably more worried about my Hawaii trip than me making the team, but that’s OK!’’

More than OK, for holidays come and go, while Turner will happily be known as a Diamond forever.

Origin Diamonds to gather for camp