The Silver Ferns will come into game two of the 2019 Constellation Cup with the lead and the winner of game two's Nissan Game Changing Matchup could have a huge say in how this series ends.

Another Diamonds vs Silver Ferns game decided by one goal? I’m sure we’ll all look back on these times and laugh, but I’m not sure my heart can stand too many more of these thrilling finishes.

In game one we focussed on a good old-fashioned defence vs offence battle in our first Nissan Net Points Game Changing Match-up, and it did not disappoint. Maria Folau and Ameliaranne Ekanasio got the win for the Silver Ferns, but it wasn’t easy as Sarah Klau and Jo Weston got their hands to plenty of ball and caused some havoc.

For game two, I thought we’d move up the court a little and take a look at a match-up between two of the best midcourters in the business – Aussie workhorse Liz Watson and the Kiwi superstar Laura Langman. 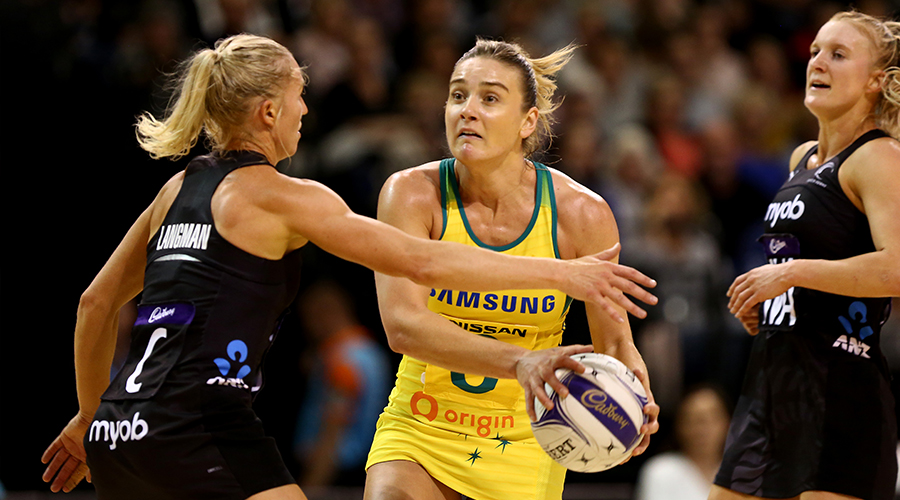 Clash of the Titans

Whether she’s lining up at centre or wing attack, Liz Watson is one of the most dominant players in world netball. It takes a special player to shut down her run and drive, which can quickly take over a game.

But of course, New Zealand have one of the greatest athletes to ever play the game roaming the midcourt in Laura Langman.

It doesn’t matter what position Watson ends up playing, these two stud midcourters always seem to find each other and duke it out for four quarters.

Look for both of these players to be right at the top of the Nissan Net Points scorers, taking full advantage of the centre pass, centre pass received, feed and assist points that they routinely lead their teams in.

Both of these relentless athletes are leaders of their respective teams, Liz Watson the Vice-captain of the Australian’s and Laura Langman the Captain of New Zealand. They demand respect from their teammates and their opposition every time they step on to the court.

And, whether representing their country or their Suncorp Super Netball team, they are both prolific Nissan Net Points scorers.

In game one, Watson led all players with her 78 Nissan Net Points while Langman was right behind her with 57.5. Both players’ ability to feed the shooters with a mixture of pinpoint-accurate passing and creativity helps them keep the points ticking over as feeds without an assist, with an attempt and with a goal assist are worth +1, +1.5 and +2 points respectively.

Whichever of these two players come off the court leading the other in assists should lead the game in Nissan Net Points.

While there are plenty of opportunities for attacking midcourters to rack up Nissan Net Points, it’s the turnovers and sloppy play that can really hurt your end score.

As we know, throwing an interception not only kills your team’s momentum, it’s worth a whopping -10 Nissan Net Points while turnovers from penalties or missed passes are worth -8.

When you are the key feeder to the shooters, as Watson and Langman typically are, you’re upping your chances of throwing bad passes and committing turnovers.

In game one, Langman turned the ball over five times whereas Watson only committed two over the four quarters, which is where her extra 20 Nissan Net Points came from when the final whistle blew.

Whichever of these two high-volume mids can cut back on the turnovers should come away with the chocolates.